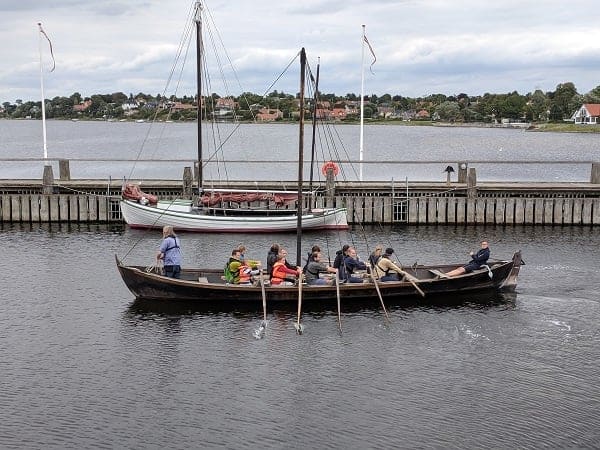 Since the birth of Baby T1.0 in 2013, we have been heading back to Denmark every 1.5 years to visit family and friends. We decided on the 1.5 years cycle so we would alternate between summertime and Christmas.

The last time we visited Denmark was Christmas of 2017. Back then we had to carry a lot of stuff because we still needed a stroller to get around with Baby T2.0 and both kids were still in diapers. This time around, we didn’t need to pack a stroller and only needed to bring night-time diapers for Baby T2.0. We also didn’t need to pack as much stuff for the plane ride. Overall, it was much easier to travel with the kids this time around.

Although it was technically a 1-month vacation, I had to work for 2.5 weeks out of the 5 weeks we were there. This was mostly because we went to Maui earlier this year so I didn’t have enough holidays to use. Also, given my job functions, it was simply not possible to take a month off. Fortunately for me, it was possible to work remotely as I’ve been doing that every time we went to Denmark for an extended period of time. So when we were in Denmark, I structured my work day to fit our schedule. I ended up starting my day around 8 AM so I could catch up on my emails and communicate with my Asian co-workers. I would take a few breaks in the middle of the day. Then I would work a few hours in the evening so I could communicate in real time with my co-workers in North America. Not your typical 9-5 workhour, but I was glad that everything worked out.

Highlights of our Denmark Vacation

We caught all of our flights both ways, a major accomplishment considering the last Danish trip, we were denied boarding in Frankfurt and had to stay one extra night. This time, on the way to Denmark, we had about 1 hour to connect in Paris, Charles de Gaulle. But our inbound flight from Seattle was delayed right from departure (it was half the price flying from Seattle compared to flying from Vancouver!). We ended up only having about 25 minutes to catch our next flight at the airport. Mrs. T and Baby T1.0 ran while I ran with Baby T2.0 in my arms. Fortunately, there were no people at the security and customs lines and we made it to the flight just in time for departure.

We visited the Givskud Zoo and saw safari animals like lions, wolves, giraffes, zebras, elephants, bison, gorillas, etc roaming around. Both Baby T1.0 and Baby T2.0 were fascinated with the different animals. The zoo also had a dinosaur park where there were more than 50 life-size dinosaurs on display. Baby T1.0 was very excited to see some of his favourite dinosaurs in the park. 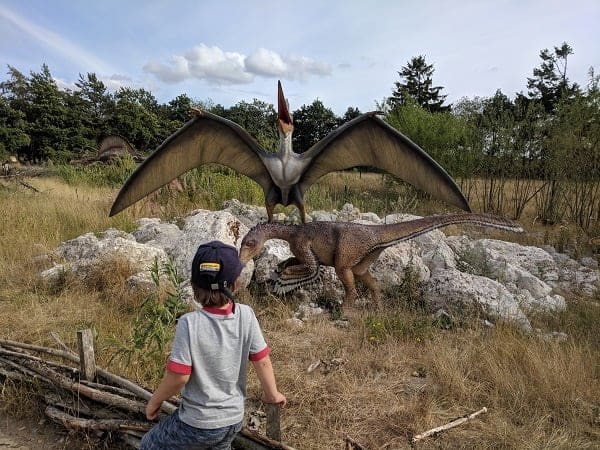 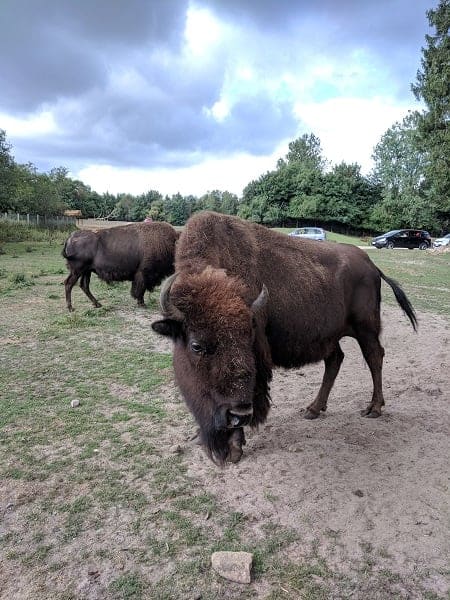 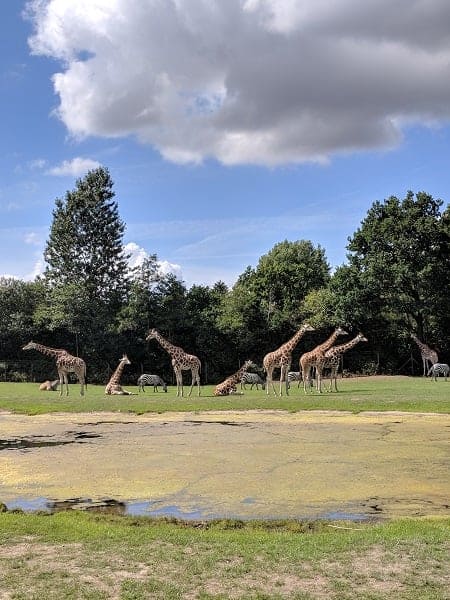 While staying at Mrs. T’s grandma’s summerhouse, we went for ice cream several times. The ice cream store was about 2 km walk (~1.2 miles) from the summerhouse each way and both kids managed to walk the entire way by themselves. Mrs. T and I were very surprised that Baby T2.0, at 2.5 years old, managed to walk that far by herself. We had a great time walking around with the kids and playing different games to keep them entertained.

In the last few years, artisan ice cream has gotten really popular in Denmark and the Danes are demanding high-quality ice cream. While things are typically quite expensive in Denmark, for some reason, ice creams are reasonably priced in Denmark – a giant scope with a waffle cone is usually around 20 DKK (~$4 CAD). 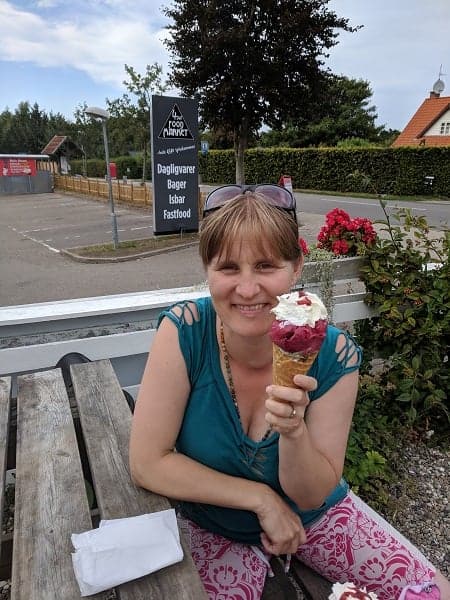 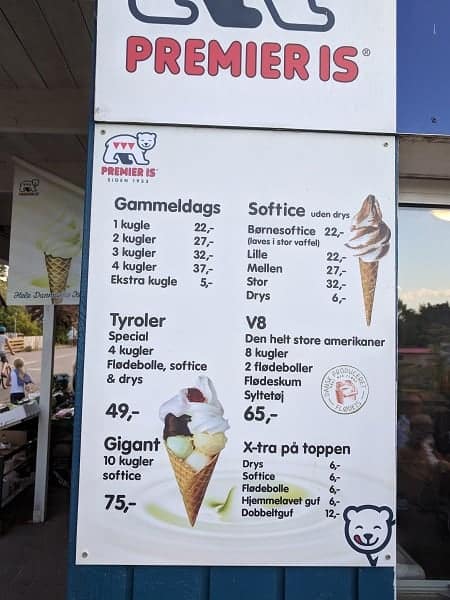 We went on an overnight cruise from Copenhagen to Norway with DFDS. We got on the cruise ship around 4 PM. The ship left Copenhagen at 5:30 PM and sailed to Oslo during the night. While on the ship we enjoyed a delicious seafood buffet and mouth-watering desserts. We arrived in Oslo the next morning around 10 AM. We then had the day to tour around Oslo before boarding the cruise ship by 4:30 PM. We then returned to Copenhagen the next morning.

Because we only had a short time in Oslo, we joined an Oslo city tour to maximize our time. The tour took us around Oslo and we saw many different attractions like Vigeland Park and Holmenkollbakken ski jump.

Since I had never seen a ski jump in person before, I was completely shocked by how steep it was. It was crazy to imagine ski jumpers sliding down the steep ski jump then flying through the air for over 100 metres. What a crazy sport!

After our Oslo city tour, we had some time to walk around Oslo. We managed to walk on the roof of the Oslo Opera House and enjoyed the view. It was super neat.

On the way back to Vancouver, our flight departed from Copenhagen airport at 6 AM. This meant we had to wake up at 3 AM then walk to the metro station to go to the airport. Both kids did AWESOME for this. While on the metro, two metro workers got on to examine something. One of them spotted the kids sitting at the front of the train, went to them, opened up the panel at the front to lift up the control computer underneath, and explained to both kids (mostly Baby T1.0) how to drive the train. It was super cool and a very heartwarming experience this early in the morning.

Lowlight of our Denmark Vacation

I have visited Legoland a few times already and always had a great time there. This time when we visited Legoland, however, we didn’t have as good an experience compared to previous times. Because it was August and essentially everyone in Europe was on vacation, so there were a ton of people in Legoland. As a result, there were long lines everywhere. For one ride we waited in line for an hour with the kids (luckily in the middle of the cue there were Lego stations set up for the kids to play). The long lines meant we didn’t get to explore the entire amusement park with the kids. There is always next time!

The first couple of weeks when we were in Denmark, it was super hot. One day, Baby T2.0 woke up with a bunch of red dots all over her body. On top of that, her left ring finger was swelled up due to some sort of infection. Concerned, we took her to a doctor to get checked out. Before heading to the doctor, I had to call our extended health insurance provider to get a claim file number so we’d get reimbursed.

As it turned out, the red dots on her body were caused by heat rash and the infection on her finger was from some plant she had touched. After removing the plant from her finger, the doctor prescribed an antibiotic cream for her and referred us to another doctor in the hospital for a second opinion (just to be sure). The second doctor in the hospital agreed with the first doctor’s analysis and didn’t prescribe anything else. Interestingly, we didn’t get charged for seeing the doctors, probably because Mrs. T is Danish and has universal health coverage.

Score one for universal health coverage!

All in all, we had a great time in Denmark. With the kids being older now, it was much easier to travel with them. While in Denmark, Baby T2.0 picked up a lot of Danish. I wish I could do that too!

For now, we plan to visit Denmark again for Christmas in 2019. By then, it should be even easier to travel with the kids.