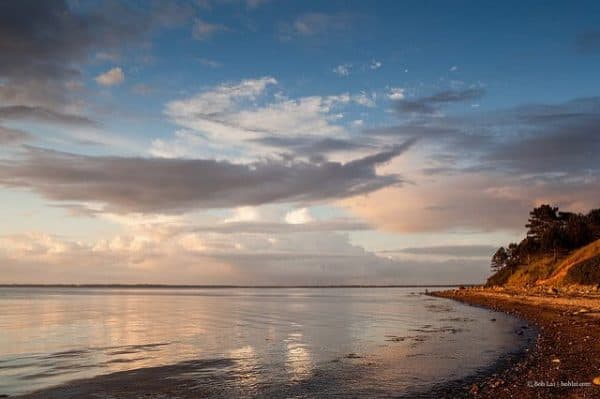 When we were in Denmark, we stayed at Mrs. T’s grandma’s summer house for a week. It was situated about an hour northwest of Copenhagen. While there, we spent a lot of time just relaxing, having hygge, eating ice cream, and walking on the beach.

One day walking along on the beach, I noticed a giant tree growing on the sea cliff very close to the ocean. There were no other trees nearby. The tree was not straight. It was bendy because it was forced to grow under harsh conditions. But the tree was big and had luscious green leaves. Once we walked up from the beach, and onto the flat ground, about 10 meters or so away from the cliffs, there was a group of trees growing nicely, all very straight, all much taller than the single bendy tree growing on the cliff.

The tree on the cliff face very harsh conditions, yet it managed to grow big and flourished.

The other trees on the flat ground had good conditions and they grew big and flourished as well.

Comparing the two groups of trees, I began to wonder, if I had to rate one group over the other, would I say one is better off than the other one?

I wouldn’t and I couldn’t.

All I could do is applaud at the trees for their determinations to grow big and tall and flourish.

Seeing these trees growing under different conditions made me wonder about being privileged.

Is financial independence retire early (FIRE) only possible if you come from a privileged background or are privileged?

Some people in the general public seemed to think so.

Whenever a major media outlet publishes stories on FIRE bloggers, almost always people leave harsh and unfriendly comments. Hiding behind a computer screen, these people criticize that financial independence retire early is only possible, because the person is privileged. Their family is wealthy, they graduated from college without any debt, they had high paying jobs, they didn’t have a mortgage, and so on and so on.

FIRE bloggers like Liz and Nate from Frugalwoods, Tanja and Mark from Our Next Life, Justin and Kaisorn from Root of Good, Sam from Financial Samurai, Steve and Courtney from Think Save Retire, even Pete & his wife from Mr. Money Mustache all have faced such criticisms of being privileged. In these commenters’ eyes, these FIRE bloggers are privileges, so it was simple and easy to be financially independent and retire early.

But is this true?

I think it is completely false and a general misconception.

While being privileged does give you a good financial start, if you don’t take the opportunity, it doesn’t mean anything.

For example, although Johnny Depp earns millions of dollars for each movie he makes, he has been spending way more than his pay cheques. He is in big financial trouble because he is living large. Most people would think that Johnny Depp is privileged, but FIRE is not something that will be achievable for him.

And most of us have probably heard or read studies that showed wealth usually ends by the second or third generations.

Being privileged does not automatically mean and lead you to financial independence retire early.

If you look at the FIRE community, there are also folks that are successful financially that came from a harsh upbringing. Looks at Jason from Mr. Free at 33. His mom died from drug addiction and he worked as a car dealership service advisor, certainly not very privileged at all. Jeremy and Winnie from Go Curry Cracker grew up poor but managed to retire in their 30’s. Kristy at Millennial Revolution came to Canada with her family from China, had very little money growing up, but still managed to retire in her 30’s with her husband Bryce.

Although they didn’t come from a privileged background, these people managed to flourish financially, reached financial independence and retired much earlier than your typical retirement age of 65.

It’s easy to come from a privileged background, take everything for granted, and do absolutely nothing to improve your financial life.

It’s also easy to be privileged by earning a high income, spending more than you earn, and can’t ever get ahead financially.

Take me as an example. I am privileged. My parents paid for my university tuition and living expenses, so I graduated without any debt. For that, I am forever grateful, but I didn’t take that for granted. After graduating from university and started working, I was saving a large amount of money each month. I was also monitoring my net worth.

I am also privileged because my dad retired at 43. Through him, I was able to see first hand what early retirement meant and how to structure a meaningful post-retirement life. I also learned how from my parents why stealth wealth is so important and why spending money on things that you value is more important than trying to impress people by having expensive things.

I could have easily make excuses, not take any actions to improve my financial life, ask for financial support from my parents, and take my privileged background for granted.

When I first started working, my dad gave me $5,000 as a gift to help me get started financially. Rather than spend it all on some expensive toys, like many young people would have done, I put all that money in my TFSA and invested in stocks. Over time, that money grew.

Being privileged is fine and dandy and all, but it doesn’t mean a thing if you don’t take this advantage to allow yourself to be better financially.

Similarly, if you came from a non-privileged background, don’t fret. Work hard and take small incremental steps to allow yourself to be better financially.

I truly believe that financially independent and retire early is possible to a large percentage of the population. It is up to you to take actions, pursuit it, and make it possible. You can read tons of personal finance books and articles about FIRE, but if you don’t take any actions, nothing will happen.

I’ll be blunt here, stop wasting time making excuses and stop finger pointing other people. Start looking from within and start looking at things you can do to improve your financial life.

So start your FIRE journey today. It’s worth it.

14 thoughts on “It’s not about being privileged or not, it’s about taking the opportunity”