Hey everyone, today’s post is from the talented J from Millennial Boss. I had the pleasure to meet her and get to know her at FinCon17. It’s always neat to meet another person in the FIRE community that works in high tech. She definitely knows the struggles of working in high tech and finding time to work on the blog and other side hustles. I hope you enjoy her post. Take it away J!

My mother kept her wedding album in a drawer in our living room growing up.

I remember flipping through the pages at an early age and marvelling at how pretty my mother looked, and how handsome my dad looked.

I thought towards my future wedding and what I wanted it to look like and be like someday.

As I got older, I had more concrete plans for my wedding. I attended other people’s weddings and took mental notes of what I liked and wanted to include in my own celebration.

Something happened in my mid-twenties though that changed my plans.

I discovered Mr. Money Mustache and the concept of financial independence.

Suddenly, it seemed absolutely pointless to spend thousands upon thousands of dollars on a wedding.

I had more important goals for myself and my future husband.

I made a few difficult choices in my twenties that have distinctively altered my path and put me years ahead of my peers in savings.

I’m now just a few months shy of 29 and my numbers have grown significantly.

I’m looking at a future of financial security and abundance and it feels amazing.

It feels way better than the feeling of having those tall, lush green centerpieces at my wedding.

I want that feeling for as many twenty-somethings as possible and think I know how they can get it.

Here are the four major life decisions that twenty-somethings make out of fear of regret and what I did differently to get where I am today. 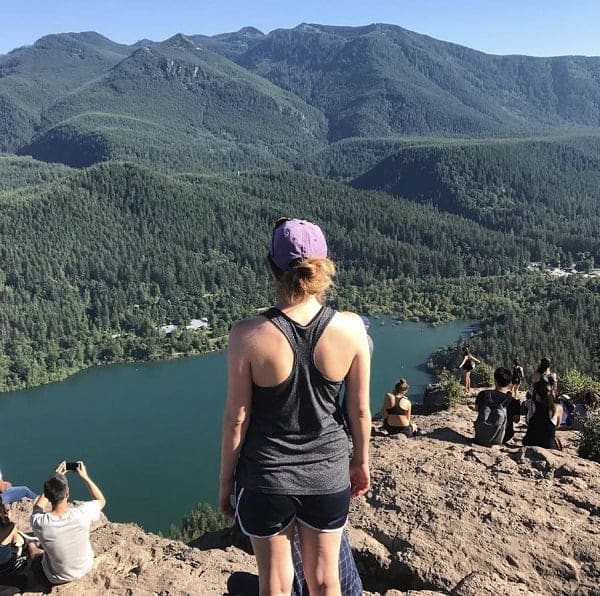 Decision #1: Staying put when you’re comfortable instead of taking risks

I struggled with career indecision in my early twenties.

Should I be a doctor or a lawyer? Should I work in finance?

Finally, I decided at 23 on working in technology.

I had worked my way into my first tech job and I was thrilled to find that I loved it.

I got my Masters at night, reimbursed by my employer, which opened up my career opportunities.

I was promoted and hit a comfortable stride.

My personal life was going well too.

My boyfriend (now husband) and I owned a beautiful home in a state that we loved.

I loved my job and we were surrounded by good friends and things to do.

We were comfortable – but we really weren’t.

I learned about financial independence and realized we could be doing so much better.

We started paying off the $100,000 of debt between the two of us and put a little into savings.

Progress was slow though.

We could have cut our expenses down to the bone but what we really needed was a bump in income and a lifestyle change.

I decided to look for jobs in the mecca of the technology world – Silicon Valley.

If I wanted to work in tech and make money quickly, I needed to be in the heart of it all.

I applied for a scholarship and attended a networking event for women in technology.

I ended up landing a job at one of the top companies in the world.

We made the move from our comfortable 3,600 square foot house in the Rocky Mountains to a tiny, studio apartment in Silicon Valley in the spring.

Honestly, my husband and I were terrified to move.

We were happy with our life as it was and moving was scary.

We had no idea what he would do when we moved out there too. We knew no one.

We committed to moving out there for a year at-least.

To see if we liked it.

It ended up being one of the best decisions we’ve ever made.

We no longer live in Silicon Valley (it wasn’t for us) but that move was instrumental to the financial security we have today (and our fearless attitude that enables us to be willing to move again for work!)

In my opinion, twenty and thirty-somethings worry too much about regrets when making the decision to move for work.

You can always move back.

Tawcan: I certainly did a few weird things in my 20’s to save money.

Decision #2: Proposing to a partner with a diamond ring

According to the Knot, the average cost of an engagement ring is over $6,000.

Somehow, we let the advertising industry hoodwink us over the last 100 years into believing that diamonds are a symbol of love.

I just overheard a girl in my office who got engaged the other day have to sadly explain to a curious coworker why she wasn’t wearing a ring. The other person said something reassuring like “don’t worry. You’ll get one eventually” in which she replied excitedly “it’s coming. I already have it picked out!”

I wanted to shout out, “You don’t have to do this!” but it was none of my business, so I just put my head down and continued to type.

When I got engaged, the first thing that people did was grab my hand to take a look at the ring. The act felt ridiculous, especially to someone who is well versed in the concept of financial independence.

I told my husband before proposal that I did not want a diamond engagement ring. I had done some research and wanted a moissanite engagement ring instead.

Moissanite looks almost identical to a diamond and comes without the financial and the ethical baggage of the diamond industry.

Instead of paying thousands for a diamond ring stone, he paid $300 for my stone.

We took those extra thousands of dollars “saved” and paid off debt.

As I look at my hand right now, I see zero debt and hundreds of thousands of dollars saved.

Other twenty-somethings look down and just see a diamond.

Do I regret not having a diamond? No.

Our love for each other and a diamond have nothing to do with each other.

Decision #3: Having an expensive wedding & honeymoon because that’s what you’re supposed to do

As I mentioned at the beginning of the article, I was pro wedding planning the majority of my life.

As a kid, I drew sketches of my wedding dress.

As an adult, I pinned beautiful wedding images to my Pinterest boards.

When it came time to plan my wedding though, I just couldn’t do it like everyone else.

Weddings are one of the largest expenses people have in their twenties and thirties.

There is absolutely no way I could justify spending that much money on a wedding personally.

There is also no way I could justify my parents spending that money on my wedding.

We had a 95 person winter-wedding with a Game of Thones inspired theme.

Here is the exact breakdown of how we budgeted for everything.

I ran into some hiccups convincing my parents that a smaller, less-traditional wedding is better.

For example, the rehearsal dinner was actually ugly Christmas sweater themed and at a pub, which horrified my mother.

She had imagined a traditional elegant affair that she could talk about with her friends.

I also didn’t invite her friends to the wedding and kept the guest list tiny (in her eyes).

There were many tears shed over this wedding.

I had to make some concessions that added thousands of dollars of cost to the wedding.

She hated my idea of a 20-person wedding on a mountain in the rocky mountains.

We settled on a nearly 100-person non-traditional wedding in the state where I grew up.

It was a great day that I look back on fondly.

At times during the planning process, I wondered whether I would regret not having a big, traditional wedding.

We also didn’t plan a fancy honeymoon and chose to take a week-long road trip instead.

I worried whether I would regret not going to St. Lucia or the Maldives or wherever else I see honeymooners go on Facebook.

Well, we just passed our one-year anniversary and we don’t regret anything.

We did almost the entire wedding differently than most and came out ahead because of it.

Decision #4: Upgrading your lifestyle when you’re able to do so

This last one we didn’t do right from the beginning at all.

It’s proof though that you can reverse the course fairly quickly if you start down any of these false paths.

Once we started making over 6 figures combined, we bought a big house and a new car, and furniture to fill up the big house financed with 0% interest credit cards.

We could “pay” for the monthly payments every month but we certainly weren’t paying down debt and getting ahead.

If we lost our jobs, we would have been in a tight spot.

That pressure came out in little squabbles over finances and tension.

When we learned about Mr. Money Mustache, we started to reverse all of these decisions.

We sold $4,500 worth of furniture on Craigslist, paying off the remaining balance on the credit card.

We sold my car, eliminating the remaining balance on the car loan and saving a calculated $750 in monthly expenses.

We also moved and rented out the house, eliminating the big monthly payment.

We downsized into a smaller, way less nice arrangement but it was enough for us.

Some days we regret not having the space and the convenience of two cars and a big house, but we also know that our twenties and thirties are a perfect time to sacrifice to get ahead.

The money we save now is worth more due to compound interest over time.

We’re also in a better place to skimp on housing comforts that we may want when we’re older.

We still struggle with lifestyle inflation with every income bump we receive but we’re more aware of the impact that it has on our finances.

We also truly understand the phrase of “keeping up with the Joneses” after we regrettably tried to be them for a few years.

These are the top 4 decisions that millennials worry about regretting that in my opinion, could mean the difference between a strong financial future or a weak one.

Bio: J is a twenty-something blogger living in the Pacific Northwest part of the United States. She built a $200,000 net worth and paid off $100,000 debt by 27 years old. She hosts a money podcast, FIRE Drill podcast (https://firedrillpodcast.com), and blogs about millennial finances at millennialboss.com.

Dear readers, are there other decision that you made younger out of fear or regret?

My wife & I started dividend investing in 2011 with the dream of living off dividends by 2025 when we are in our early 40’s. Today our portfolio generates over $2,500 dividend per month.