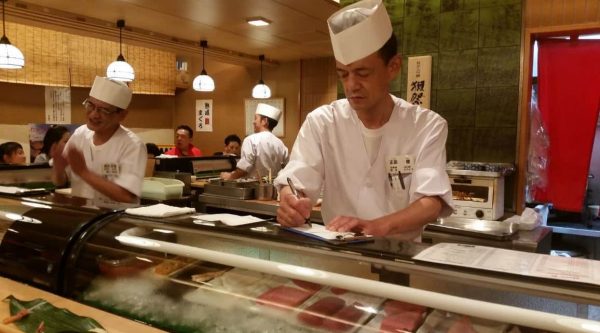 I’ll be honest. Although I grew up in Canada for more than half of my life, I still don’t quite understand the concept of tipping. Tipping is not a common practice in Taiwan (or anywhere in Asia). So when my family and I immigrated to Canada over 20 years ago, it was a complete new concept. Similarly, tipping is not a common practice in Denmark, so it’s a new concept to Mrs. T as well.

Here in North America, the customary rule is to tip 15-20% when eating at a restaurant.

I get it, waiters and waitresses are earning minimum wage, so they depend on tips for their livelihood.

Why is the tipping percentage a fixed number rather a flat per service fee?

Don’t get me wrong, I don’t have any problems with the concept of tipping. If I get good service, the waiter/waitress serving me definitely deserves a good tip. I also understand  why restaurants charge a fix percentage of gratuity for a large group. Because it takes more effort to provide proper service to a larger group. My problem lies that more and more people in the service industry just expect their customers to tip regardless of the quality of service.

When we eat out from time to time and receive good service, I generally tip around 15% before tax. But there were a few times I left a very small tip because we had very poor service. For examples, a few times it took forever to get our water re-filled because the server was nowhere to be seen, or one time the waitress told us to use a baby car seat for Baby T1.0 instead of bringing a high chair for him. Tipping shouldn’t be mandatory, it should be based on quality of service.

When and where should you tip?

It’s well understood that one should tip when having a sit down meal at a restaurant where there’s someone serving you. If you order take out, do you tip? I don’t, because in theory I don’t get any service.

Do you tip when you take a taxi? It seems that it’s almost mandatory to tip taxi drivers nowadays, which I find slightly annoying. If a taxi driver gets out of his or her way to take my luggage or open the door for me, I don’t have a problem leaving a tip. Unfortunately I have had a few rude encountered with taxi drivers that made me wonder why I should tip in the first place.

A few times, I was shocked that the taxi driver would ask me why I was tipping so little when all they did was driving me from the airport to my house.

Lately I noticed a lot of cafes have a tipping option when paying with a debit or credit card. Aren’t the baristas doing their job by making coffee for you? Why do we need to leave a tip?

That leads to the question – just exactly when and where should you tip?

Are we supposed to tip anyone that works in the service industry now? Is this the new expectation?

Where does this madness end?

Dear readers, I’m curious, how do you tip?