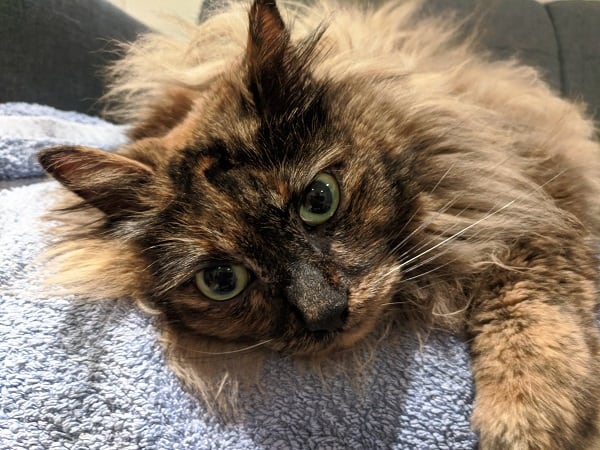 Every morning after getting her breakfast, our beloved 9-year old cat, Perlemus (Pearl Mouse in Danish) would jump on the bathroom sink counter and ask for water. That was the morning routine that her and I developed over the years.

One November morning, I noticed that she missed her jump a couple of times. She eventually got on the sink counter but was hesitant to jump down after drinking some water.

Then earlier this month, we noticed that she had a noticeable limp when she walked. After consulting each other, Mrs. T and I agreed that we hadn’t noticed Perlemus running or jumping in a few days. She was not as active as she used to be. She used to jump up on our beds, the window sills, couches, or chairs. But that was not the case all of a sudden. She would curl herself up and lie under one of our beds for hours.

We thought she had an injury and took her to the vet to get her checked. The vet noticed the muscles on her hind right leg were weaker than her left hind leg. Thinking the weakness was caused by either an injury or arthritis, the vet prescribed pain medication to see if that’d help.

A few days after we started giving her the medication, we noticed that Perlemus was dragging her right leg rather than limping. Then a few days later, she would walk for a little bit while dragging her right leg, then collapse completely. She didn’t have the strength to stand and couldn’t really walk around.

I took her to the vet again the next day. The vet hoped it was caused by a bulging discs but warned it could be caused by tumors. Hoping for the best, the vet prescribed steroid medication to see if it would help. Seeing her physical conditions, however, the vet warned me that this could be it. There was only a very small chance that the steroids would be able to help.

It all happened so very fast.

She would spend most of her days lying under Baby T2.0’s bed. Whenever she wanted to move, she would crawl using her front legs with her hind legs dangling trailing behind her. She couldn’t stand at all. We had to carry her around the house.

She was a shadow of her former active self.

When we tried to stand her up, she’d stand on the tip of her hind legs for a few seconds before collapsing to the ground. To make matters worse, she couldn’t get in the litter box herself. She was urinating all over the house and even on herself. A few times, we found herself sitting in her own urine.

For about a week, we had to periodically take her to the litter box and hold her in there so she could relieve herself. It was hard to see our beloved cat in this condition. She was still the Perlemus we knew. She was meowing, she was purring, and she was cuddling. But she was losing her mobility and her dignity.

It was especially hard for the kids (and still is). Perlemus had been there all their lives. She was their big sister and they loved her.

One morning, during breakfast, I told both kids that Perlemus wasn’t doing well and her condition didn’t seem to be improving. With tears running down my face, I told them that we might have to put her down. The four of us just sat there, crying. We were all upset about Perlemus. For me, it was even more upsetting to see both kids so devastated, so heartbroken.

Over the next few days, Mrs. T and I debated whether it was the right thing to euthanize Perlemus. The discussions would almost always end with one or both of us crying, feeling extremely upset that we’d lose our beloved cat forever.

We talked to the vet several times over the phone to go over all of our options. Even if we do more advanced diagnostics like an MRI to find out what caused it, there was no guarantee that she could get better. It would mean putting a lot of distress on her just to potentially prolong her life. Deep down, we knew putting her down was the logical thing to do and the right thing to do.

We scheduled an appointment to euthanize Perlemus. The appointment was four days out to give us more time to spend with her. The day before, after the kids’ last day of school for the year, we told Baby T1.0 and Baby T2.0 about the decision.

Both kids were devastated. Baby T1.0 was affected by the news the most. He told us that he wanted to spend time with Perlemus by himself. With the bedroom door closed, we could hear Baby T1.0 talking to Perlemus, sobbing, and crying.

A little while later, Baby T1.0 told Mrs. T and me that he wanted to talk to us separately. After giving him a hug he told me (paraphrased slightly for clarity):

I’ve always wanted to have more money. This summer when we were camping with Agong (Grandpa in Taiwanese) and Ama (Grandma in Taiwanese), I went for a walk with Agong one morning. He told me that money is not the most important thing in the world. Money can’t buy happiness and it can’t make you healthy if you are sick.

I didn’t understand what Agong meant until now. What’s important is not money. What’s important are family and love and the feeling in your heart. I really feel that feeling now and I am upset that Perlemus will not be with us anymore.

I gave Baby T1.0 a big hug and told him that I was proud of him. Mrs. T and I continued to comfort both kids and explained that it was the best thing we could do for Perlemus.

For Mrs. T and I, the hardest part was the wait until the appointment. On the day of the appointment, Perlemus didn’t want to eat much, she didn’t really want to stay downstairs with us either. We went upstairs with her and sat around her, petted her, and cried. When I looked into her green eyes, it seemed that she knew what was going to happen. She knew this was it.

The four of us took Perlemus to the vet that faithful morning. We stayed until the very end. It was hard losing our beloved pet. It was even harder to see both kids heart broken.

Perlemus, thank you for being in our lives and loving us.

We love you and you will be forever missed.