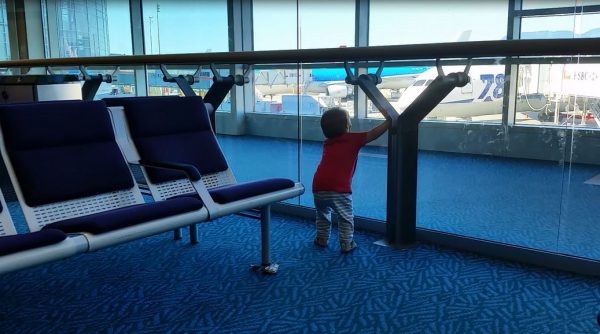 Baby T is no stranger to overseas travels, having made the trip to Denmark and back when he was 7 weeks old and again when he was 20 months old. Wanting to take advantage of the infant 10% flight fare, Mrs. T and I decided to book a trip to Japan before he turns two. Luckily for us we found an amazing airfare deal. What was our experience with Japan travel with a toddler?

Japan Travel with a Toddler

Japan is a very interesting place to visit. I’ve been to this beautiful country more than a handful of times but it was Mrs. T and Baby T’s first time. Quite frankly I didn’t know what to expect traveling with a toddler in Japan. Since Baby T is a charmer and has long wavy blond hair, I figured he would gather a lot of attention in Japan. And I was right. Everywhere we went Baby T was making friends and getting attention left, right, and center. The Japanese ladies simply adored him, wanting to touch him and taking pictures of him.

The funniest thing for me was probably seeing people’s reaction whenever I was walking with Baby T or pushing the stroller with him in Japan. Because Baby T has blond hair and Caucasian facial features while I have short black hair and Asian facial features, this usually resulted in very puzzled and odd looks from the Japanese.

Overall our 2 week trip with Baby T was great! We did find out that traveling with a toddler in Japan can be both a lot of fun and exhausting at the same time. Baby T loved every second of the trip and even learned a few Japanese words here and there. It’s pretty amazing how quickly he was able pick up Japanese words (i.e. sumo, okonomiyaki, shabushabu, shushi).

Our experience traveling with a toddler in Japan

I knew traveling with a toddler would require a slightly different pace than when traveling by myself. So we limited ourselves to only doing two or three attractions each day. That was definitely a good idea. Japan has an amazing public transportation system. We used public transportation mostly and walked whenever we could. It’s amazing how extensive the rail and subway systems are in Tokyo alone. As an engineer I always wonder how much careful planning it took to build the rail and subway systems in Tokyo.

Traveling in Japan with a toddler will be exhausting. We loved traveling with Baby T in Japan but perhaps we were slightly too ambitious. Since Baby T was only 22 months when we were in Japan, he was still a bit too young to follow instructions or to be reasoned with. Temper tantrums were an issue from time to time, especially when he was over tired or over excited. It certainly didn’t help when he lost both his pacifiers one day in the train station and we didn’t have any backup. He screamed and cried for close to an hour on the entire train ride and we weren’t able to calm him down at all. People on the train must have thought that we were terrible parents. Given the option, I would recommend to either travel with a small baby before he/she can walk, or travel with an older kid like 4 years old and up. Option 1 does mean you get to take advantage of the 10% infant air fare, while option 2 means more expensive air fare.

Tips on Japan Travel with a Toddler

Now if you’re a brave soul and decides to travel with a toddler (or two if you’re really really brave), here are a few tips I would like to share.

We are quite happy to report that Baby T slept very well during the trip. But that shouldn’t come as a surprise as he has been sleeping through the night (i.e. 10+ hours) for over 6 months now. Now we’re back in Vancouver, the last few nights have been rough for the little guy. He has been waking up a lot during the night. He had similar experience for a few night when we came back from our month long trip in Denmark earlier this summer, so we believe he’ll sleep just fine once the jetlag is gone.

We don’t have any more trips planned before Baby T turning two, so we won’t be able to take advantage of the 10% air fare. We haven’t quite decided where we’ll go next, perhaps Hawaii? Perhaps the Canadian Rockies? We’ll have to wait and see.

27 thoughts on “Traveling with a toddler in Japan”