I used to rock climb in the great outdoor city of Squamish frequently. Rock climbing was my way to spend time outside, challenge myself physically and mentally, hang out with friends, and have a good time. Interestingly, rock climbing has taught me quite a few things about financial independence.

Before we go any further, there are some rock climbing terms I need to explain.

Top Roping – This is where the rope is set up at top of the climbing route with an anchor system. The climber attaches himself/herself on one end of the rope and the belay partner is on the other end of the rope. As the climber climbs up the route, the belayer at bottom of the climb pulls the rope through a belay device to maintain the same amount of slack in the rope system.  Top roping is very safe, assuming the anchor system is set up properly and the belayer is paying attention. 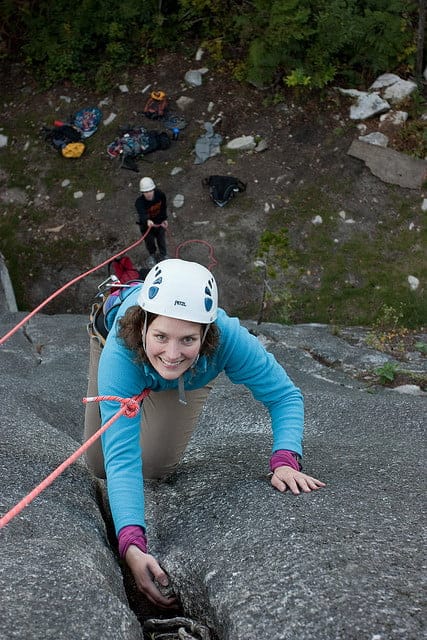 Lead Climbing – This is where the climber ascend the route with the rope trailing behind him/her. The climber clips the rope into a protection periodically as he/she climbs up. The belayer must feed the rope as the climber climbs; the belayer must also pay at attention to make sure to catch the climber if there’s a fall. One should only lead climb when one knows exactly what he/she is doing. 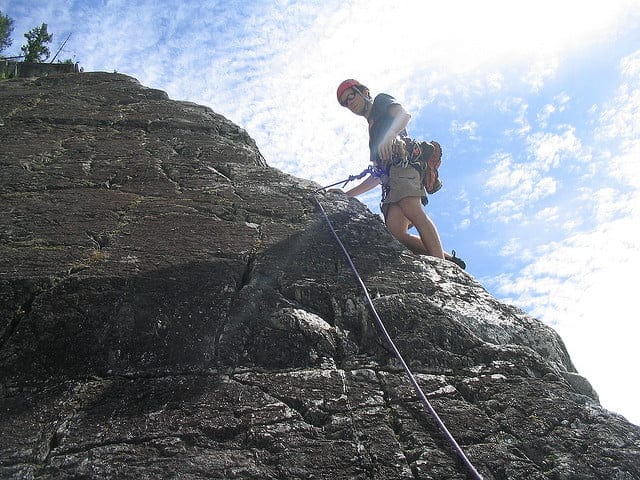 Sport climbing – This is a variant of lead climbing where the protections on the route are pre-drilled by someone that established the climbing route. The climber uses quickdraws to attach the rope to the protection. Once at end of the route, the climber has two options. With the first option, the climber can set up a rappel system at the top, rappel down, and take out the quickdraws on the way down. With the second option, the climber sets up a belaying station at top of the climb, belays the partner while the partner climbs up and takes down the quickdraws, then both partners find walk down via a trial or rappel. 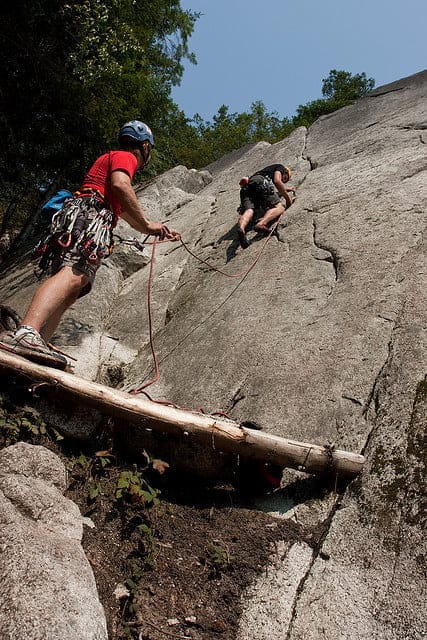 It doesn’t matter if you’re top roping or leading, your life is dependent on your belay partner whenever you are attached to the rope. While having a full trust in your partner is very important, it is more important to have good communication with your partner. When you’re high up on a route, you often can’t hear or see each other. How does your partner know that you want to be lowered? Or that you’ve finished the route? Or you want to take a rest? Or that you’re ready for him/her to second up the route in a lead climb scenario? That’s why you need to establish a communication system prior to ascending the route and constantly communicate with each other. Same thing applies on your quest for financial independence with a partner. Both of you need to be on the same page. The two of you must share the same goals and have the same vision on how to achieve these goals. Regular communication about your quest for financial independence is essential. Are there anything that can be improved, like savings rate, or investment strategies? What about having some side hustles to increase the overall income? What about discussing potential pass income streams? Becoming financial independence is a journey. Along the way, there will be challenges and difficulties. The only way to get through these challenges and difficulties with your partner is to discuss and determine agreeable solutions. If the two do not have good communication, you may end up drifting apart and perhaps breaking up. This is why Mrs. T and I talk about our quest for financial independence every regularly and discuss how we can improve.

Rock climbing requires a lot of physical endurance, especially when you’re doing a multi-pitched route (ascent of a climbing route with more than one stop at a belay station, typically because the rope is too short to do the entire route). Whether it’s an easy climb or a hard climb, you need to make that sure you’re committed mentally. Other than being belayed for safety measure, you’re completely on your own as you ascend up the route. Contrary to popular belief, your belayer cannot pull you up during a climb. So whether you complete the route or not is entirely up to you. When you’re on the crux (most difficult part) of a route, self-doubt may set in, especially if you have taken a fall or two. You must commit mentally or you can easily give up on the climb. Similarly, the financial independence journey requires mental commitment. Becoming financial independent is not something you can achieve in a few months or a few years. It takes time and commitment to get to the end goal. Without mental commitment, you can easily give up on the goal of becoming financially free after a few years into the journey. This is why I give a lot of kudos whenever I see people that achieved financial independence, or have been on this journey for many many years.

As mentioned above, when you’re ascending a route, you’re on your own, challenging yourself both physically and mentally. You’re climbing because you wanted to, not because someone’s pushing you to do it. Similarly, becoming financial independence is a self-declared challenge. Nobody cares if you are financial independence or not. You’re doing this for yourself because you want a better future.

Falls are very typically when it comes to rock climbing. I’ve taken my shares of falls, both top roping and leading. The first few lead falls were scary as hell because I had no idea what to anticipate. When it comes to lead falls, you could fall by a lot, especially when you’re by a protection, about to clip the rope in. Why? First of all, since you are pulling the rope to clip it into the protection, there’s a lot of slack in the rope. Second because you’re by a protection, this means that you’re at least 3 metres (~9 feet) from the last protection. If you fall at this time, it means you can fall by more than 6 metres (~18 feet). After taking a few lead falls, I realized that falls are OK and it’s part of the sport. Professional rock climbers quite often run-out their protections on harder routes, meaning when they fall, they could fall by 10 metres (30 feet) or more.

When it comes to the quest for financial independence, we will endure small failures along the journey. For example, one might invest in a rental property only to find out 2 or 3 years in that the property requires too much managing or that the property is not generating any passive income. One might invest in a business hoping to generate passive income only to find out that he/she does not have the personality to own and operate a business. Whatever the failures are, it is OK to encounter them, as long as we learn from the experience and manage the potential losses properly. As someone once told me… failures are what defines us, raising up from a failure will only bring positives.

It’s OK to take a rest

Sometimes your arms get tired during a climb. There’s no shame to find a spot on the route and take a short breather. Reaching financial independence is a multi-year process, it’s certainly not a one day or one month process. Because it is such a long process, we may find ourselves needing some rests to re-focus and re-evaluate our goals. It’s totally OK to take a rest and relax a bit.

Learn constantly and don’t be afraid of ask questions

There are a lot of things one can learn when it comes to rock climbing. For examples, how to belay properly, how to set up an anchor system, how to rappel, how to lead climb, how to place trad protections, and etc. While some of these things can be learnt from books, many of them require lessons from other more experienced climbers. When I started climbing, I followed other more experienced climbers than me in order to learn how they do things. When their anchor systems looked different than the ones I set up, I would ask them why; when they led a route using trad gear, I would volunteer to second up the route to take out the protections, so I could learn in real time how they placed the protections. I would ask a lot of questions and ready to absorb as much knowledge as possible.

Same thing applies to financial independence. To achieve financial independence, we all must have passive income equal or greater than our expenses. There are many different types of passive income and we must learn which ones are suited best for us. With Mrs. T and I, we feel most comfortable with generating passive income through dividend stock investing. We’ve read a lot of books on investing and dividend investing; we also read a large number of personal finance and investing blogs; we also ask fellow bloggers questions whenever we have one. After following the PF blogosphere for a number of years, I’ve learned that everyone in the community is willing to help and provide advise. I believe we should all forget self-pride and help each other.

Have fun while at it

I rock climb because I enjoy the sport, the company, and spend time outside. Even when not climbing, it is fun socializing with friends. The financial independence journey is just the same. We all need to have some fun while on this journey. As harsh as it can sound, I think it’s important to take the time to enjoy our lives now because we can’t be certain what’s going to happen tomorrow. While figuring out what we want to do after achieving financial independence is important, not being financially free should not prevent us from doing things that we enjoy and have fun. Want to paint when financial independent? Don’t wait, start painting now. Want to travel and explore the world when financially independent? Don’t wait, start traveling to different part of the world a few weeks each year. Stop depriving ourselves from having fun in our lives, we all need to live a little. 🙂

Dear readers, is there any activities that taught you about financial independence?

My wife & I started dividend investing in 2011 with the dream of living off dividends by 2025 when we are in our early 40’s. Today our portfolio generates over $2,500 dividend per month.