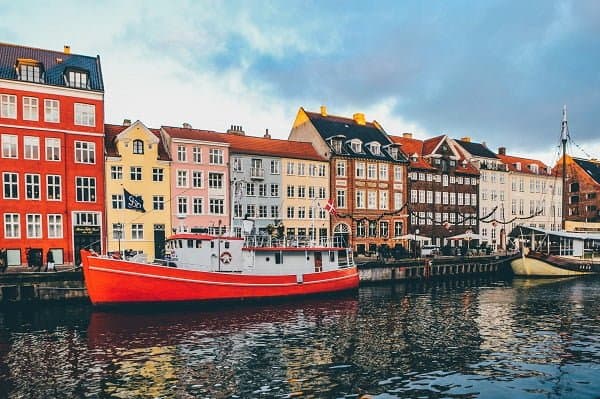 Mrs. T, Baby T.1.0, Baby T2.0, and I are spending a month in Denmark visiting family and friends. This is my 7th time visiting Denmark and the country is feeling like a second home to me.

When we started looking for flights to Denmark, we were shocked by how much it would cost to fly out of Vancouver Airport. The airfare started at $1,500 CAD (~$1,150 USD). Given that both kids are over 2 now, the cost for flying 4 people to Denmark was getting significant.

Thanks to Google Flights, we were able to search for cheaper alternatives. One of the cheaper alternatives was to fly out of Seattle Tacoma Airport. As it turned out, the tickets were about $750 CAD (~$575 USD) each. Half the price compared to flying out of YVR!

And since the departure flight time was in the afternoon and the return flight would land in the morning, we didn’t need to stay extra nights in a hotel near Sea-Tac (i.e. spend more money). All we needed to do was pay the parking fee for our car.

If you could recall from our last month stay in Denmark about 1.5 years ago, we had a little incident at Frankfurt airport. On the way back home we were flying from Billund with connections in Frankfurt and Calgary. Our Billund to Frankfurt flight was delayed which meant that we had very little time to catch our connecting flight. We ran like crazy when we arrived in Frankfurt, carrying one kid in our arms each. We made it to the boarding gate and the agents were still helping many passengers to board.

Unfortunately, we were denied boarding even though we had valid boarding passes and travel documents (we never found out the reasons). We were told that we got rerouted to return Vancouver via Beijing. We thought it was a ridiculous idea to fly halfway around the world to return home, especially with two little kids. So we ended up staying in Frankfurt one night and took the same Frankfurt-Calgary, Calgary-Vancouver flights home on the next day.

According to European Air Passenger Rights, we were entitled to 600 euros per person for being denied boarding on a flight longer than 3,500 km. When we got back to Vancouver in January 2017, we filed complaints to both Air Canada and Lufthansa. But both airlines denied responsibility for our little incident at Frankfurt airport. It was extremely frustrating dealing with both airlines. Not willing to give up, we sent the file to the German authority responsible for the European Air Passenger Rights. About a month later, we got a generic letter from the German authority stating they were investing the case.

Then it went completely quiet for over a year.

Shortly after we booked our Denmark flights for this year’s trip, we received an email from Lufthansa stating that they were ready to pay us the 600 euros compensation and asked for our mailing address. Delighted to hear this news, we quickly replied back with our mailing address stating we’d accept compensation for 4 people (2,400 euros). A few weeks later, we received a cheque worth over $3,800 CAD. Then a few weeks later, we got a letter from the German authority stating that Lufthansa had agreed to pay out the compensation and we should expect a cheque in the mail.

Woohoo, the little guy (us) had won against the airlines! Essentially our 2018 Danish trip was entirely paid for.

We were so glad that the European Union had set up such laws to protect air passengers. Too bad there are no such protections for US and Canadian originated flights.

While in Denmark, I got a pre-paid SIM card for 49 DKK (~$10 CAD/$8 USD). The SIM card came with 10 DKK worth of talk time/SMS/data. Given that I had to work remotely for 2 weeks while in Denmark and I would be calling co-workers a lot, I knew I had to get a top-up package.

Just before we left Canada, I was looking for a cheap cellphone package for Mrs. T. Although her Freedom Mobile cellphone rate of $25 per month was cheap, the coverage was terrible. She would often not get coverage or non-home coverage (cost extra to call & text). I went to Rogers, Bell, and Telus stores and asked for the cheapest monthly cell phone packages.

As it turned out, $25 was the cheapest package I got were from Bell and Telus, and you’d only get ~200 minutes of talk time, 100 free SMS, and unlimited weeknights and weekends.

In comparison, the pre-paid package from Lebara was 1,000 times better than anything the Canadian carriers were able to provide. It’s ludicrous how much we Canadians are paying each month for cell phone packages! For example, my work pays for my cell phone and my phone bill would usually be over $100 a month!

As a dividend growth investor, it certainly makes sense to invest in the Canadian carriers like Rogers, Telus, and Bell, because they are making money hand over fist!

When I talked to my father-in-law about Lebara’s CHEAP prepaid package, he told me that it was quite expensive for Danish standard!

Apparently, they pay around 25 DKK per month, which included a lot of talk time, unlimited SMS, and lots of data.

From talking to Mrs. T’s family and friends, the Financial Independence Retire Early (FIRE) concept seems to be a very foreign concept to them. I do wonder whether the FIRE concept is spreading in Denmark or not. Looking at the Rockstar Finance Forum, only 3 Danish bloggers were listed (obviously not a 100% true representation). A quick search on Reddit /EuropeFIRE on Denmark/Dane gave me zero results. Weird.

Interestingly enough, Mrs. T’s uncle retired from his full-time job a few years ago in his mid-50’s. He was a bit of an exception though as he had been working internationally and had not lived in Denmark for over a decade.

Maybe the lack of interest in FIRE is due to the awesome Danish social benefits? As far as I know, if you are unemployed, you are entitled to employee insurance (EI). If you are still looking for a job after a certain period of time, the government would place you in a temporary position for a few months. After the temporary position is finished, if you are still looking for a job, you can start collecting EI again (don’t take my words 100%, I may have the wrong understanding).

There’s probably a reason Danes are the happiest people on earth.

As you may know, Mrs. T and I plan to move to Denmark and Taiwan in the near future and live in each country for a couple of years. This is so our kids can learn more Danish and Mandarin and connect with their parents’ cultural roots.

Unfortunately, the Danish immigration laws are pretty strict, so the easiest way for me to live in Denmark for an extended period of time is to find a job and apply for a work visa (kind of defeats the purpose of FIRE, oh well). When Mrs. T and I talked to her parents about us moving to Denmark and finding a job for me, they would make the following comments:

“Both of you would need to work, you need double income to live in Denmark.”

“Living in Denmark is a lot more expensive than Canada.”

I am not sure if I completely agree with them though. Some people have said that single income is not possible in a high cost of living city like Vancouver, but we are doing it. While we are in Denmark this time, I plan to take a closer look at cost of living and find out more details about living in Denmark one day.

20 thoughts on “Random Thoughts from the land of Vikings”