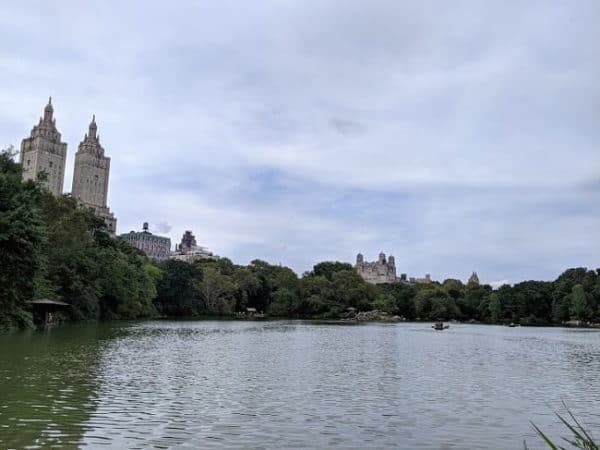 Back in late August, Mrs. T, Baby T1.0, Baby T2.0, my parents, and I went to New York City for nine days. I have meant to write up a trip report and provide travel tips on visiting New York City with young kids for fellow parents but I have been busy. I suppose late is better than never right?

This was my second time in New York City. I visited NYC back in 1997 with my parents and my brother. As a teenager back then, I thought NYC was a scary and sketchy city. Every day we were there, we heard ambulances zipping through the streets with sirens blasting. We didn’t feel particularly safe walking around major tourist attractions like Times Square and Central Park back then.

Maybe because I have travelled to many different cities since 1997, and I am a more seasoned traveller, but my latest visit to New York City gave me a completely different perspective. I felt that the city was very safe, people were friendly and helpful, and I enjoyed walking around the city, even late at night. Safety was never a concern for me, even with two little kids in tow.

Both Baby T1.0 and Baby T2.0 started flying since they were little. For NYC, this would have been the ninth airplane trip for Baby T1.0 and the seventh airplane trip for Baby T2.0. Although they are experienced little flyers, we still utilize some helpful strategies to keep them entertained during flights. Here are some air travel tips that we utilized for our New York trip:

When it came to seating, we had the option to sit 2 and 2 or 3 and 1. We opted for the 3 and 1 options where I sat with the kids and Mrs. T sat in the same row but across the aisle from us. It worked out great. Both kids kept themselves busy throughout the flight and it was easy to keep them entertained. If the kids were younger and needed more help, the 2 and 2 seating arrangement would have been a good idea.

Things to do & see in New York with young kids

Like our trip to Japan and Taiwan earlier this year, we didn’t jam-pack our daily itinerary. We wanted to have ample time, so the kids could play whenever necessary. Therefore, we kept a slow pace in terms of checking out attractions in New York City. Here are some attractions that the kids (and Mrs. T and I), particularly liked.

Being somewhat of foodies ourselves, we didn’t want to skip going out for food for the sake of saving money (no more next time syndrome!). To keep expenses reasonable, we avoided ordering appetizers and desserts from time to time. Here are some restaurants that we really enjoyed:

Tips for parents travelling in New York with kids

We all had an amazing time in New York but we certainly looked up for some tips before our New York trip. Some tips were useful, some weren’t as useful. Here are some tips for parents travelling in New York with young kids or toddlers that we found particularly useful for us:

Years ago, I would have toured New York City at a super-fast pace and see as many attractions as I could. Having kids have changed my attitude toward travel significantly. Touring New York City at a slower pace was much more enjoyable. We saw a lot of attractions and enjoyed some great food. Sure we didn’t see EVERYTHING we wanted to see but that is totally OK. We would love to go back to New York City in the future and explore the city more.